Who do you want to become? There is a contemporary proverb of sorts that says: “Focus on where you want to go, not where you currently are.” I looked it up this week to find the right wording and hopefully it’s provenance. To no avail. I came up with the saying but not where it comes from. Perhaps it’s just an internet riff on a quote from business and personal development guru Tony Robbins, who said: “Focus on where you want to go, not on what you fear.” Either way, it fits well today with our Gospel passage and Jesus’ teaching on discipleship.

Jesus is at it again. Today, for the second time in as many chapters, Jesus speaks about his impending end. “The Son of Man is to be betrayed into human hands, and they will kill him, and three days after being killed, he will rise again.” It’s pretty annoying. I mean, here we are, happily going about our life, following along as Jesus heals the sick and even gloriously transfigures to reveal God’s presence. But again, Jesus spoils our enjoyable times by talking about unpleasant topics like betrayal, suffering and death. Besides which, we’ve heard it before. Around this time in the last chapter, as we heard last Sunday, Jesus first predicted his coming time of suffering. “The First Passion Prediction” it’s called. Today we hear it again, a little differently in what’s called “The Second Passion Prediction.” We’ll hear it again, with more and different details, later in chapter 10, but not for a few weeks.

Three times Jesus speaks about his coming passion. There is a pattern to it. First comes the prediction of the difficult times ahead, then the misunderstanding or disbelief of the disciples, followed by teaching about, and an invitation to, discipleship. Jesus is always on about discipleship… what it means to follow in Christ’s Way. What really matters about Jesus’ passion is what it means for the disciples. The prediction is not just about Jesus, but about any and all who follow in his Way. It’s about us too, because has implications for our lives. The pattern of prediction, misunderstanding and teaching is repeated, again and again, some suggest, because it is such a hard, such an unbelievable, message. If discipleship means being taken to a cross, well… we should misunderstand. It should take us a while to grasp what it is that Jesus is on about.

Today we hear that the disciples “did not understand what [Jesus] was saying and were afraid to ask him.” Instead, they argue with one another as they journey to Capernaum, wondering, “Who among us is the greatest?” Somewhere inside themselves they know that it’s not the right question, that it’s a foolish argument, for when Jesus asks about their conversation, they demur. But Jesus knows. Like with his passion predictions, there doesn’t have to be anything supernatural about Jesus’ knowing. As both God’s own heart and fully human, Jesus knows human nature. Paying close attention to on-the-ground realities was all Jesus really needed to know the human desire for greatness, the human quest for power and status, and the human response of violence to anything or anyone that threatened those things. We can all predict the future just by paying close attention to on-the-ground realities around us. Jesus knows who we are, from the inside, and Jesus loves and believes in us so much, that Jesus continues to implore us to nevertheless choose God’s Way. It’s not a question of current reality, it’s a question of desire: Who do you want to become?

Rather, becoming “last of all and servant of all” starts with knowing who we are and what we desire. Some might call it our sin, though not necessarily. Even then, understanding ourselves as sinners, if that theological language is helpful, is only the first step. Rather than pretending otherwise, or remaining stuck in shame or guilt, being “last of all and servant of all” begins with acknowledging our desire, our will, our passion… it means admitting the good, the bad, and the ugly of who we really are, and then letting God’s Spirit transform us. It means believing in forgiveness. It means actually letting go of control. It means putting another’s need, interest or desire consciously before our own, without expectation of repayment.

What it means to be first by being last of all and servant of all becomes clearer as Jesus goes on with today’s teaching on discipleship by offering an example. Jesus takes a little child, puts it among them, and says: “Whoever welcomes one such child in my name welcomes me, and whoever welcomes me welcomes not me but the one who sent me.” The kind of welcoming that Jesus is talking about isn’t grudging and it isn’t romantic or cutesy. This kind of welcoming is about rejecting dominance. Servanthood is the renunciation of dominance. Being last of all and servant of all doesn’t mean not being important. Rather it means welcoming one who is not like me. It means putting oneself among the vulnerable and the powerless.

One of the most powerful ways of practicing such servanthood is in the act of listening. Listening is an act of servanthood because listening deeply to another means setting aside one’s own desire, one’s own will and opinion. It is to give up arguing for the sake of understanding another’s perspective, another’s interests, another’s need. In any good and healthy relationship, listening is not, of course, one sided, though it may seem so in any particular moment. But over time, both parties have to be willing to both share who they are, what they think and what they desire, and listen to the same from others. It means hearing and acknowledging both the difference and the commonality among us to develop trust and build community. It’s not something we do once but an ongoing process. Relationship demands that we engage regularly. It is not inevitable but a learned skill that can be practiced by intent.

In a couple of weeks, on the evening of Tuesday October 2, we are having an information session about the concepts and practices of community organizing. Community organizing seeks to contribute to human flourishing by working in local communities to develop grassroots leadership of those who want to transform the world from what it is, whatever current reality they see, to what they believe it could be. The practice is grounded in developing trust and building community across lines that usually divide, done first and primarily through the act of listening. It is done for the purpose of developing the common good, in our case, the common good of our parish of St. Andrew’s. The information session here will describe the concepts, practices and processes in more detail and highlight how we could engage with them for our becoming as a community of faith.

More immediately, you’ll see an announcement in the bulletin from Helen about the Annual Christmas Tea and Bazaar. There is a question there about the readiness, willingness and ability of the community to complete the tasks necessary to continue with the event. It is a real question and there is a real need for us to listen to one another, and to our own hearts and souls and wills, so that we can come to a decision about proceeding with the event this year or not. Is it a “yes or no” question? Are there ways the event could or should be adapted? These are some of the avenues of conversation you could engage in at coffee time today.

Who do you want to become? If, as Jesus suspects, you want to be first in the kingdom of heaven, then it’s worth paying close attention to Jesus’ teaching today. It’s not a question of who you have been in the past, or who you are now, but who you want to become. It’s okay if we don’t immediately know. We just have to keep listening – to one another, to the cry of our own souls, and to God’s voice coming through both. 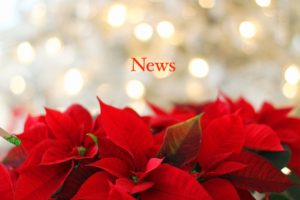 Announcements Advent and Christmas News The Diocese has informed us[...]