Acts 7:55-60; John 14:1-14 In the past few years, I have attended funerals for 2 kids who were in youth groups in churches where I’ve ministered. I prepared both for confirmation as young teenagers and knew both their families as faithful and active Christians and members of the Anglican Church. Tragically, one never made it out of high school, because she died of a drug overdose a couple of years ago. The other grew into a great young man but his life was cut short when a rock he was standing on while hiking with friends gave way and he fell to his death last summer. Young people such as these are not supposed to die and both their funerals reflected the utter devastation of their families, friends and communities, including me. Tragedies such as these can test our faith to its fullest as we wonder why? Why does God allow innocent people to suffer and die?

Times of tragedy and loss are certainly times of questions, heartrending questions, but in the flow of our church year, it seems the most intense time of wondering, doubting, and questioning is actually the Easter season. Jesus’s resurrection comes so quickly on the heals of his suffering and death that we never have enough time to process the loss before we are confronted by the miracle of new life. It is so shocking that we jump in to celebrate the unexpected new life that God brings, even as confusion and doubt and fear and questions continue to swirl. That the season of Easter lasts for 50 days, 10 days longer than Lent, speaks to a reality that preparing for suffering and death takes less time than working through the shock of the transformed life of resurrection. With that shock comes questions and so inspired by Jesus’ disciple Thomas and those walking on the road to Emmaus so soon after Easter, I have been encouraging you to bring your questions to church. A few such faithful prayers have been left in the question box, including a new one last Sunday: “Why does God allow innocent people to suffer and die?” It’s a classic question that gets to the heart of our faith by holding God to account for the worst of life’s tragedies… and while there is no definitive answer that will ever fully take away our grief, our anger, our fear, our confusion or our doubt, it is nevertheless a question worth exploring. And I think our readings today can offer us a way in. Why does God allow innocent people to suffer and die?

In the midst of our ongoing wondering about Easter life, today we hear a terrible story of death from the early days of the church in the Acts of the Apostles. Today we hear the story of the stoning of Stephen, that apart from its backstory could lead us to misunderstand it. Stephen had been arguing with leaders in a synagogue, and much like with Jesus, many were incensed by his teaching and preaching. They set up false witnesses against him and he was arrested and brought before the council where he gives a long speech, almost the whole of chapter 7, in which he lays out salvation history, beginning with Abraham. Near the end of his speech, he calls his listeners “you stiff-necked people, uncircumcised in heart and ears…” and relates the persecution of ancient prophets to Jesus, concluding, “They killed those who foretold the coming of the Righteous one, and now you have become his betrayers and murderers. You are the ones that received the law as ordained by angels, and yet you have not kept it.” With such a harsh critique and condemnation of the gathered community, it makes sense that they were so very angry with him… angry enough to kill. And like the saviour who he faithfully followed, in the end, Stephen called out to his God and prayed for forgiveness for those who persecuted and ultimately killed him. Why didn’t God save Stephen from such a fate? Why does God allow innocent people to suffer and die?

To begin exploring this question that gets to the heart of our faith, we have to wonder about what kind of God we are referring to. The nature of the question itself says some things about this God: “Why does God allow…” It assumes that God is in control, allowing or not allowing certain earthly activities or events. This God must have the power to directly intervene in the affairs of earth, or else the question is moot. And yet if that power to direct and control is not used to save even the innocent from a tragic fate, this is a terrible God. Christian theology is littered with all kinds of justifications and explanations for this cruel God of ultimate power who seems to do so little to help, even the best people. We do intellectual and spiritual gymnastics trying to let this God – the almighty creator of the universe – off the hook of responsibility, sometimes even when our hearts are broken and our sense of justice betrayed. Stephen might not have been innocent the way Jesus was, but he was still clearly a good man of deep faith and passionate conviction. He is someone God should have saved from a torturous death. So why wouldn’t God do that? Any hope of finding any kind of answer lies in deepening our understanding of God and maybe changing it altogether. More specifically, it means changing our understanding of the nature of God’s character and power.

Christian faith is founded on 2 key moments… the 2 central miracles we celebrate in our 2 grand festivals… Jesus’ Incarnation at Christmas and resurrection at Easter. The road between, the way of Jesus the Christ, is a way of living with sacrificial love committed to healing and reconciliation, to economic justice, to political freedom and to social equality. It is a way of standing up to violence and standing against systemic oppression. It is a way of speaking truth to the dominating powers of our world. It is a way of forgiveness and service. God may have the ultimate power to be in control of humanity but God chooses relationship instead of domination. In Jesus, God chose to join humanity, in our very skin and bones, in our trials and tribulations, in our temptations and our triumphs, in our life and in our death. With the birth of Jesus the Christ at Christmas, Immanuel, God-with-us, joined us in the human family as the complete and ultimate image of God, made flesh. The mystery of God and humanity fully joined together may not be one we can understand, but it is what we proclaim. And it is this Jesus, fully human and fully divine, who was ultimately killed by the powers of the world. It is God who hung on the cross. It is God who suffered and died. God’s power lies not in control or domination but in the steadfast commitment to new and resurrected life that transcends tragedy, heals grief, calls out injustice, transforms loss, loves and forgives even unto death.

In John’s Gospel, Jesus spends a great deal of time trying to prepare his disciples for the difficulty that he knew lied ahead. Just before today’s passage, Jesus told the disciples that he would be with them only a little longer. Such a possibility is not acceptable to Simon Peter, so he asks: “Where are you going?” and “Why can I not follow you now?” In today’s passage, Jesus begins a long explanation designed to reassure and comfort fearful and confused disciples. After Jesus’ initial description of a many-roomed dwelling being prepared for them, our friend Thomas expresses the questions of many: “Lord, we do not know where you are going. How can we know the way?” To which Jesus replies: “I am the way, and the truth, and the life. No one comes to the Father except through me.”

Like his very nature, this famous statement where Jesus claims his divinity cannot be separated from his humanity. And yet it has been used too often as a club to scare or beat people into believing in an exclusive God of dominating power. It is ironic considering that the way of Christ was precisely the opposite. The way of Jesus is a way of suffering and death. The truth of Jesus is a truth about power in forgiveness and sacrificial love. And the life of Jesus is a life of service committed to peace with justice where each one puts the concerns of others first, such that all of creation has access to abundance of life. The conclusion that “no one comes to the Father except through me,” is not about excluding those who don’t believe the correct doctrine or dogma. Rather, it is the reality that the only way to come to God is to follow Jesus’ vulnerable way of service, sacrifice, and love.

Why does God allow innocent people to suffer and die? There is no really good or satisfying answer for someone who is grieving a terrible tragedy. We all have moments when we want a God who will smite those who seem to be our enemies, even if the enemy is just bad luck or gravity or wrong place, wrong time. We all want a God who will supernaturally intervene in the affairs of the world on our behalf. But the God to whom Stephen cried out to grant forgiveness in a final act of love, and the God who Jesus embodied in life and in death is a God whose intervention comes by joining the divine triune community with human community. We might desire a God of supernatural, dominating power, at least from time to time, and yet the God Jesus shows us, the God Jesus embodies, is one who works not through control but through relationship. In the words of Jesus today, God offers us the reassurance that when suffering and death comes to us, not only when we breathe our last, but also all the little deaths along the way, God will be right there with us, giving us courage and strength, through the community that is the Body of Christ. 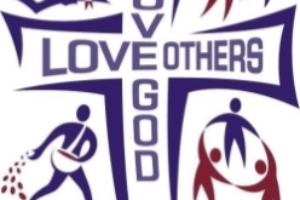 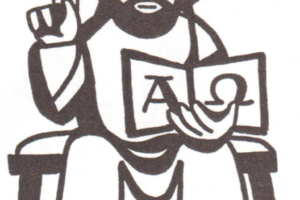